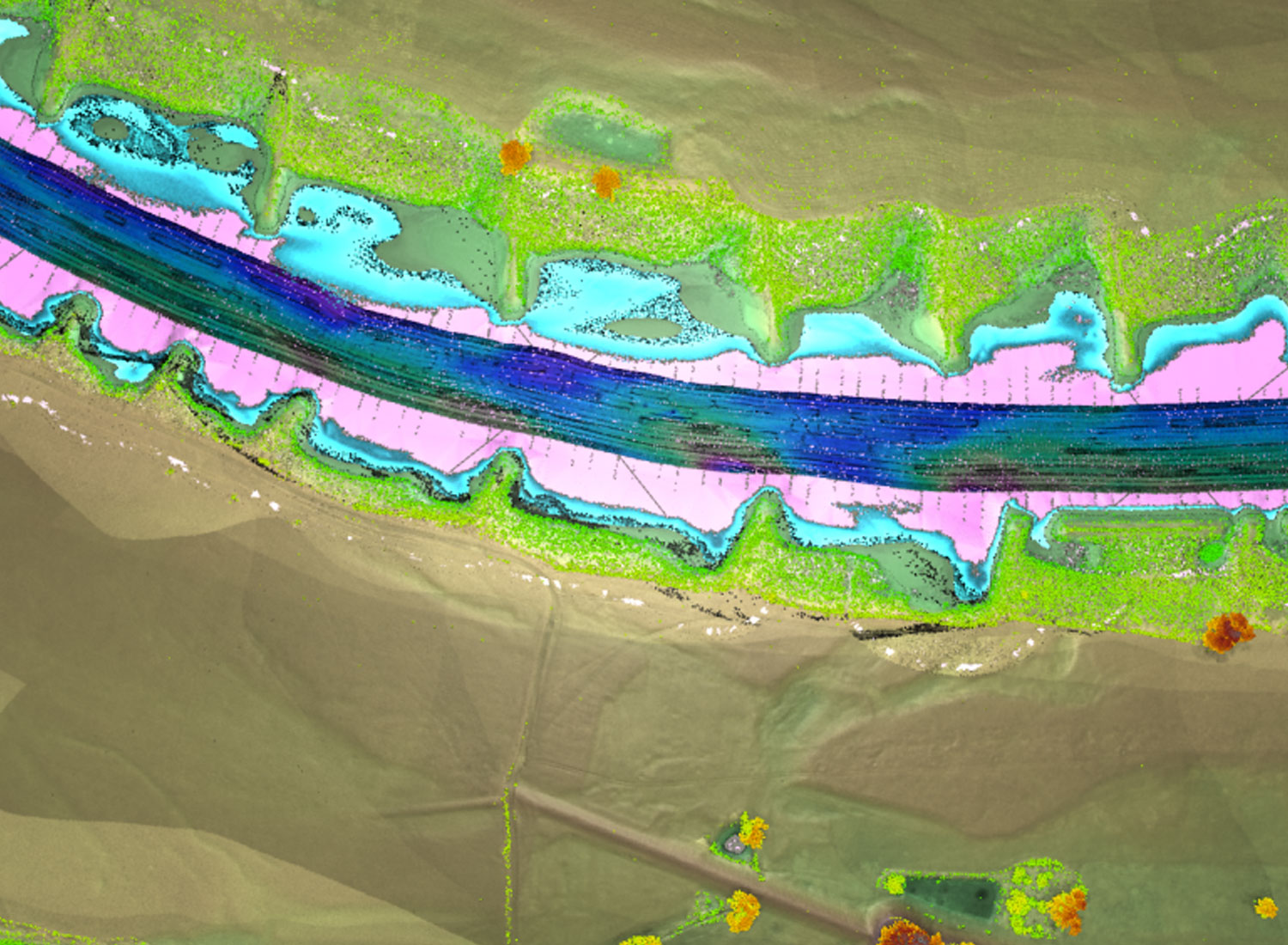 For evaluating the potential of topobathymetric lidar, a pilot project between the German federal water authorities BfG (Bundesanstalt für Gewässerkunde), WSV (Wasserstraßen- und Schifffahrtsverwaltung des Bundes) and BAW (Bundesanstalt für Wasserbau) was established. The topobathymetric lidar survey including aerial RGB imaging along a 15km long section of the Elbe river in northern Germany was performed in two stages in March/April 2014 and September 2015. The raw lidar point cloud had been processed in close cooperation with the Technical University Vienna, Austria, including calibration, strip adjustment and georeferencing. The lidar points had been classified to terrain dry, water ground, water table, vegetation/housing etc. After applying the refraction and runtime correction, the lidar terrain points above and below water had been combined with echo sounding data provided by the WSV. In the following, a detailed 0.5×0.5m DTM grid was extracted from the combined lidar/MBES data, which was thinned according to morphologic ascpects to derive a TIN. Data extraction and modelling further included the extraction of cross-sections, groin longitudinal profiles, surface modeling, and roughness area mapping. Latter was based on digital orthophotos generated on base of the acquired RGB images (again in cooperation with Technical University Vienna, Austria).

This website uses cookies to improve your experience while you navigate through the website. Out of these, the cookies that are categorized as necessary are stored on your browser as they are essential for the working of basic functionalities of the website. We also use third-party cookies that help us analyze and understand how you use this website. These cookies will be stored in your browser only with your consent. You also have the option to opt-out of these cookies. But opting out of some of these cookies may affect your browsing experience.
Necessary immer aktiv
Necessary cookies are absolutely essential for the website to function properly. These cookies ensure basic functionalities and security features of the website, anonymously.
Functional
Functional cookies help to perform certain functionalities like sharing the content of the website on social media platforms, collect feedbacks, and other third-party features.
Performance
Performance cookies are used to understand and analyze the key performance indexes of the website which helps in delivering a better user experience for the visitors.
Analytics
Analytical cookies are used to understand how visitors interact with the website. These cookies help provide information on metrics the number of visitors, bounce rate, traffic source, etc.
Advertisement
Advertisement cookies are used to provide visitors with relevant ads and marketing campaigns. These cookies track visitors across websites and collect information to provide customized ads.
Others
Other uncategorized cookies are those that are being analyzed and have not been classified into a category as yet.
SPEICHERN & AKZEPTIEREN